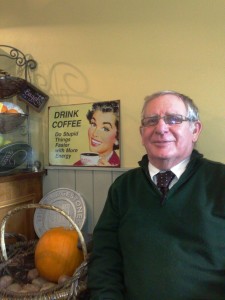 Was sheparded into the Queen of Tarts by Joe Griffin for coffee and a bun whilst on a flying business trip to Dublin.
The place is amazingly small with only half a dozen tables and a three or four counter stools. Everything is home made and the danish, apple, cinnamon and raisin, actually melted in the mouth. Joe had the individual apple crumble. Coffee just as good as the food. The savoury tarts and quiches, mostly individual as far as I could judge, looked as good as the sweets and it took a deal of will power not to partake.
This is definately somewhere to go back to. They have another shop in in Temple Bar, but that wouldn’t be one of my usual haunts!