I thought I’d try to resurrect my Christmas letter this year but once again time has caught up with me with little or no preparation done.  There is nothing truer than that time flies quicker the older one gets is true.

It has been an interesting year to say the least.  My major news is that I was finally made redundant on 6 December, having previously been notified that it would be in June.  The owners of SOS Group had decided to close it down and we were well into the process when McLaughlin & Harvey, a large construction and civil engineering group, decided that rather than just buy the machinery they would take the company on as a going concern.  So, for the third time in 33 years I moved the factory, this time from Belfast out to Mallusk.  Suited me just fine as we live under 5 minutes’ drive from the new premises. I had told them I was not interested in a long-term future but I stayed on for a few months to complete the transition.

For the rest of year – 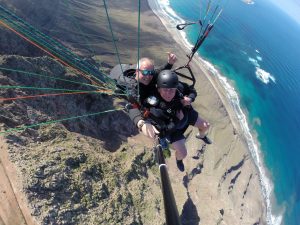 We escaped the cold in January for Lanzarote, which has become a favourite winter retreat.  Found a paragliding club there run by a couple of Germans so that provided an interesting day out.

In March I was elected captain of my golf club which effectively has taken over my social life for the rest of the year.  It has been an enjoyable experience especially working with the junior teams.  I am looking forward to having the time next season to take a more active part in the Juvenile section.

July saw the family return to Sunny Beach for the second year, having all gone in ’16 for our daughters 50th.  It’s a great venue with something for everyone from the great-granddaughters (hard to believe that they are now 8 and 3) to great-granny!! 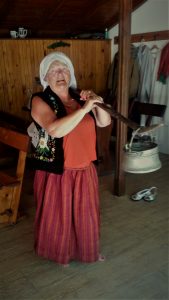 Apart from “the strip” there is the World Heritage site of Nessebar a 15-minute ferry trip (or a bus ride) across the bay, which apart from its historic remains boasts some excellent art and craft shops.

On the recommendation of a friend who has apartments in the area Josephine and I hired a taxi for a day and took a trip round rural Bulgaria including a traditional lunch with local wine and raki.

August and September were taken up with organising the move of the factory and staff to the new premises which all went pretty much according to plan.  Personally, I felt no regrets at leaving and things had changed so much with the takeover that I was looking forward to retirement.

Also in August we spent a few days in Leeds with our great friend Barbarra. 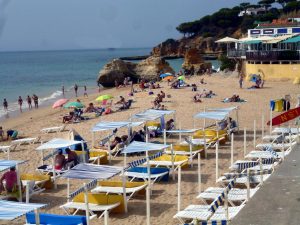 Josephine had said she fancied trying Portugal for a break so in October we spent a week about half way between Albufeira and Villamuara with a ten minute walk down to the lovely bay of Olhos de Agua. There were a couple of restaurants adjacent to the hotel who offered a three course menu for around €10 and they proved to be as good as the ones in the town charging three times that amount.  Not only that but a large carafe of the local wine was only €10.  A good value holiday all round.

On my return I was diagnosed with Polymyalgia Rheumatica which accounted for the muscle spasms I had suddenly developed.  The subsequent coulde of steroids has not only cured them but has me feeling 10 years younger.  Seems that the aches and pains that I had been getting in my shoulders and back were all associated with this.

And now we are well into December again and have just endured the worst snow we have seen for a few years, albeit only for a few days.  Enough though to send me out for winter tyres and to put the snow chains in the boot!

So, with only a week to go before the days start to stretch again, I wish you all you would want for Christmas and hope that in 2018 you achieve your dreams!