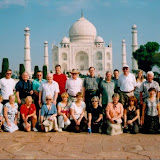 I had no real intentions of starting a travel side to the website back in 2007 so am unable to remember all that happened.  This will, therefore, be more of a photographic trip than a travelogue. What I have tried to do is link places to what I hope will be informative websites and let the reader pick up whatever interests them. as usual you can miss all the the rest and just see the photos.

It was Kuoni 7 day conducted tour starting in Delhi in mid February 2007. The group, 24 strong, assembled at the Crowne Plaza Hotel and we took off from there on what turned out to be a fairly hectic itinerary.

We started off at the Qutub Minar complex.  This is of Islamic origin and was built in the 13th century. The central tower of which was built in 1209 and is almost 73 metres high.

From there we moved across the city to the the wide boulevards of the administrative area in New Delhi designed in the main by the British architect Edward Lutyens.  This is the India of the Raj with none of the bustle and squalor of the old city.

The next stop was the old city, full of life, noise and the unmistakeable smells of India.  Rickshaws, tuk-tuks and mopeds everywhere.  One gets carried away with sheer exuberance of it.  All this following an eleven hour flight left us all ready for an early night.

Next morning we started off at the Jama Masjid, the great Mosque, the courtyard of which can hold 25 thousand.  It commands a striking view down into the city. From there we went to see the Red Fort which stands opposite the Jama Masjid.  Due to camera problems I have no shots of this myself.

The next stop was Gandhi Smriti, the house where Mahatma Gandhi lived and where he was assassinated in 1948.  This is  now a memorial garden and the footsteps of his last walk are set in stone to the point of his death.

We then embussed, to use an old military phrase, and set out on the road to Agra, city of the Taj Mahal.  This was a 250 kilometre plus journey at an

average speed of about 55 km per hour, nothing travels very fast in India.  Do not think motorways. At one stop we encountered a Hindu wedding, which involves the whole community. Amazingly loud and colourful. The bridegroom looked totally bemused.  Of course the bride was hidden away somewhere else.

We duly arrived at Agra and the Jaypee Palace hotel.  Quite a complex, but it is not recommended to leave ones windows open due to the monkeys which abound in the gardens.

And so to the Taj Mahal. No pictures can capture the stunning beauty of it. It exudes an aura of magnificence that is almost tangible.  Make it a “must go there” on your life’s journey. As a

mausoleum it is unsurpassed.

From here we went to a smaller but still mightily impressive construction, the Itmad ud Daulah, the Baby Taj. The grounds were inhabited by chipmunks and a troupe of fairly agressive monkeys, who carried out a running battle amongst themselves.

Our next stop was the abandoned city of Fatehpur Sikri which was built in the 16th century but abandoned only 15 years after it’s completion due to an inadequate water supply.  It is now a world heritage site and was being renovated at the time we visited.  The Indian government is trying to improve its record of conservation of historic sites but is struggling against thoughtless vandalism.

Back on the road again en route for Jaipur. About an hour outside Agra we stopped at a village just off the main road. It was connected with the drivers family and intended to give us a little more insight into rural life in India. The amazing thing was that children of ten and eleven could speak quite passable English in surroundings that really did not seem to be conducive to needing a second language.  But that’s India for you.  Speaking, and writing, English is seen as the gateway to prosperity.

We then wended our way on to Jaipur, the Pink City. Another bustling metropolis with amazing architectural edifices that seemed to appear willy nilly round evey other corner.

Of course the traffic was as mad as ever. There are definately rules of the road here, but deciphering them is totally beyond me. After a city tour we moved out to the Amber Fortan amazing construction about 7 miles outside the city.  Unfortunately the lake, which used to be at the entrance and reflected the facade, has all but dried up.  Within the walls it is like a small scale town, with temples, garadens and halls of various types.

It boasts some obscene frescoes, taken from the Kama Sutra, under the eaves and one of the earliest air conditioning systems which is reliant on air flow rather than electricity. One could spend a day or more exploring.

We returned to our hotel, the Country Inn, definitely not in the Country, and up to the usual Indian standards of service. This was where we found the real lifestyle contrast of rich and poor as, from our window, we could see the street families living on the pavement on the opposite side of the road

Our next port of call next morning was the Jantar Mantar, Astronomical Observatory, with a huge sundial, accurate to seconds, and constructions of the signs of the zodiac.  An architectural masterpiece.It says something that, built in the early18th century, it can still be used today.

Our last stop in Jaipur and for that matter the end of the tour, before returning to Delhi for the flight home, was the City Palace which houses  museums and galleries, halls of audience etc.  Part of it is still occupied by the Maharaja. The silver water transporters were used to carry water from the Ganges river so that the maharajas and their entourage would have “pure” water to drink  on foreign journeys!

Then it was back on the road.  The journey had its moments.  The stop off for lunch was on the opposite side of the dual carriageway.  No problem; just switch into the opposite carriageway and drive up the road against the flow for half a mile. Afterwards carry on until one comes to a convenient gap in the centre reservation to get back on the right side.

A great trip, cramming a lot of culture into a few days.  If I were doing it again I would certainly add a few days on at the end to chill out somewhere  quiet.