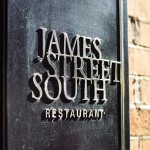 I visited James Street South with three business associates on Monday, 19 October ’09.  It has been some time since my last visit but was assured by friends that the standard was as good as ever.  We waited a rather long time for the initial drinks in the bar but this was possibly because one of the company had ordered campari with fresh orange juice.  The good thing about the restaurant is that nothing is hurried and one is given plenty of time to choose ones menu.  I was surprised by the number of people eating out on a Monday and would guess that we were the only business party.  The menu is not particularly extensive, which is a good thing in my book, but caters for a variety of tastes.  Neither is this a restaurant for those who subscribe to the Irish penchant for laden plates, but we have found that a three course meal, with two shared side dishes is amply sufficient.  I chose the roast quail with chicory, goats cheese croquette and spiced grape,  one companion had the Lobster salad with quails egg and the other the sautéed scallops with white beans, pancetta and café de Paris. None of us could find any faults. They have an extensive wine cellar and we chose a bottle each of Lebanese red and white.  The red is rich with a distinctive hint of figs. The white a medium dry with a touch of fruitiness.  For the main course two of us had the Dover Sole with  lemon, shrimp and brown butter and the other two the Sirloin with white asparagus, girolle and garlic pomme puree. We shared one portion of new potatoes and one of french beans with parmesan and shallot. The fish was perfectly cooked and the shrimps were almost crisp which had an interesting effect on the palate when combined with the flakes of sole.  My companions were voluminous in their praise of the sirloin which they asserted was cooked exactly as ordered, one medium and one medium rare. We settled for two cheese boards to end the meal.  These were composed of portions of two Irish and two French cheeses, all of which were delicious. To round it all off we finished with a 20 year old port which was, and at £24 a glass (the same price as the bottles of wine) needed to be, stunning.  All in all, with great food and wine and excellent service, not to mention convivial company, it was a most enjoyable evening