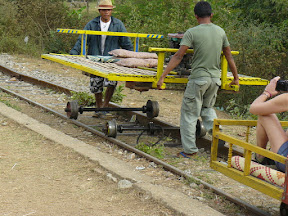 Our day started with a trip on the ‘Bamboo Train’, known locally as a ‘Norry’.  It is pure Cambodian ingenuity and constructed from bamboo planks, with a “safety rail” on the tourist version, a 4 stroke Honda upright motorbike engine and ex military tank wheels and axles. 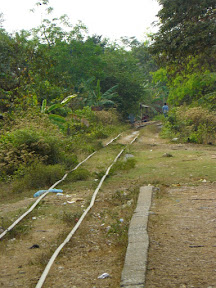 The drive unit is a v-belt and pulley!

These travel up and down the single track railway and, as there is nowhere to pass, the train with least number of passangers or goods is dismantled and lifted off the line to allow the other on its journey!  It is an amazing ride and you feel every bump, of which there are innumerable, in the tracks. Still it is a experience not to be missed!

We rested our battered posteriors in the minibus on route to the next stop which was the Ptea Tuek Dong project which takes street  families and teaches them English and a trade for a year and reintegrates them into the local society. 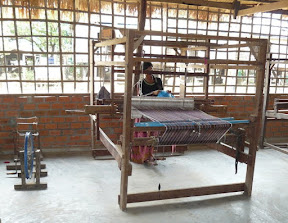 We met a group of 13/14 year olds in their classroom and their standard of writing and fluency would leave many schools in the UK lagging far behind. They live in dormitories and the older members are taught furniture making, weaving, crafts and sewing. Although there is a small fulltime manager most of the staff and teachers are volunteers. 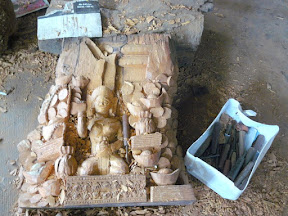 Following this we moved on to another project, this one a co-operative to bring wood carvers works to the market place.  Some of the work in progress was exceptional and the finished articles beautifully executed, but they were not really suited to the western environment.

We then moved on along past the govenors residence to the white elephant pagoda. 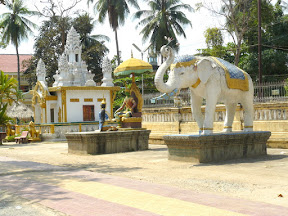 This is a mix of hindu/buddhism that ends up a bit like Disney World.  I can find very little of its history but it houses a wide variety of stupas (burial buildings) many of which have the most ornate statuary. There is also a largish bhuddist monestary in the grounds. 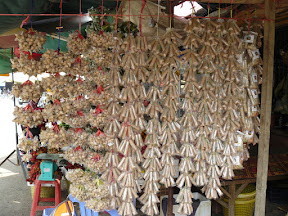 Following this we visited the local market which, as in all towns in Cambodia, is the hub of activity selling everything from statues to sausages, food to some fairly high class jewellery, not to mention clothes.

We took a break for lunch before setting out once again for another hill top pagoda.  This one was built in the 10th century and rises to 400 metres, but unfortunately has been badly despoiled by the Khmer Rouge. 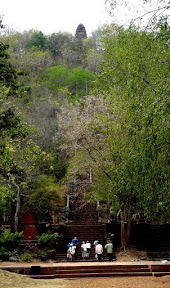 The view up the 359 steps to the top was somewhat daunting and I fortified myself with a glass of iced sugar cane juice.  There are always a group of locals who offer assistance by way of fanning etc. to help one on ones way in the 30° heat.

The lady who escorted me safely up included leg and shoulder massage as well as the fan. 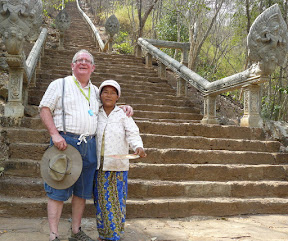 I’m certain I wouldn’t have made it without her.  At the end she explained that whe made the ascent between three and five times a day and that she had had he 7th baby 12 days before!! Maternity leave?? It was worth the effort for the views if not the monument itself but there were plenty of Cambodians praying at the altar.

We wound our way down and then it was back to the hotel to recuperate and get a nights sleep before our next adventure – the river trip to Siam Reap!