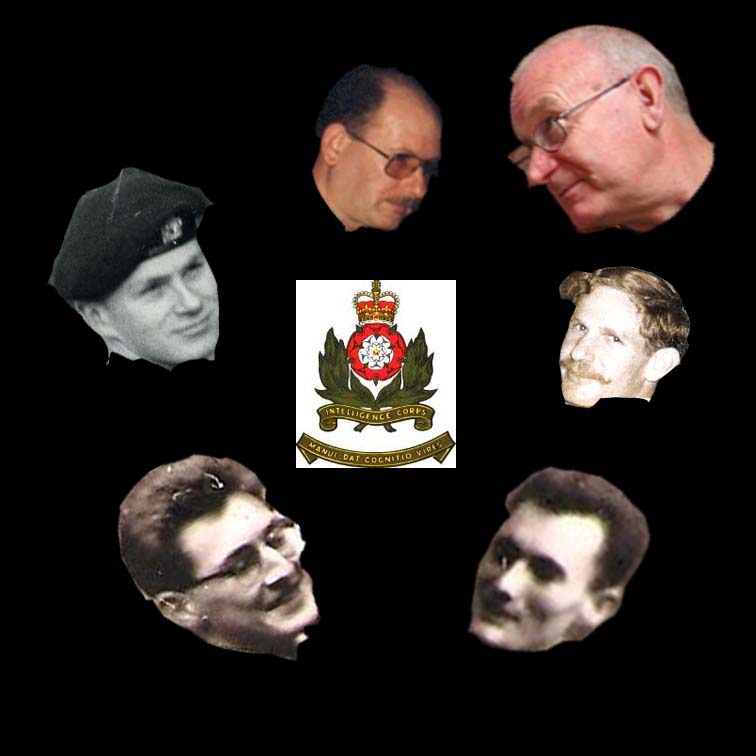 Once upon a time near a small dorf in Germany and almost surrounded by the dark and mysterious Guhor Woods was a secret place called Mercury Kaserne.

It was so secret that not even the people who lived there knew what went on behind the wire fence beyond The Boiler House and LAD;  including most of those who inhabited it.

That was excepting for a small band of exceptional Wizards named Discs who, using the amazing powers of the E Book and the B Stick of Knowledge, worked their magic over the inhabitants of the realms of  Setroom and Pit.

These Wizards were sorely put upon by The Powers That Were who considered them to be A Blot on an otherwise Pristine Landscape. The evil forces of Geoff the Fletch,  Black Mac and their Mercurial Allies swore that these wizards would not prevail.  but, under the leadership of the Arch Wizard MacKinnon, and aided by the Gnomes of M, whose nimble fingers translated the results of the Wizards spells into the reams of paper tape required to disseminate them to the Gods of Cheltenham, they ensured that The Alternative Existence flourished in this dark land.

The Gods were exceeding pleased with the Wizards and placed them on a pedestal high above the forces of those who bore the sign of Mercury. These,  though prettily attired and immaculately pressed, had no appreciation of the aesthetic arts and thus were no match for the Wizards and their Acolytes.

Alas, however, as time went on, the Wizards were manipulated by The Powers That Were and were scattered to the four corners of the earth, or at least as far as Aynik or Maresfield. Many of them became Disenchanted and forsook their Wizardly Skills and were subsumed into  Civvystreet.  A few continued to perpetuate the magic and mystery of Discdom and SI and passed their skills down in the hope that sometime in the future the Wizards  would rise up again to become The Masters of the Kazerne. 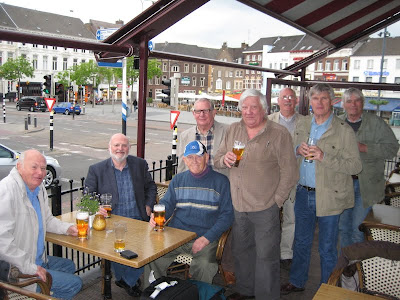 Anyway,  The Cold War came to an end and it was discovered that the Power of the Eastern Block had been a figment of the imagination of the Powers that Were.  It tumbled down and with it the Kaserne on the edge of the Guhor Wood.

The Discs, however, were sure that there was still Magic and Wizardry trapped in the soul of this land.  So, following an edict from the legendary Jonibax, the Wizard of the Wand, the Ross and Jacko sent out missives to the Original Wizards and Gnomes, to bring them back together in the land of Hell, Alt and Jägermeister. 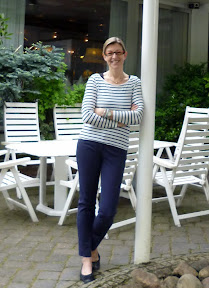 Sadly the Arch Wizard MacKinnon had been taken to a better place and thus would not be a part of this pilgrimage.

So it was  a group of eight,   Romanis, Gnome of the North, Barnes the Wizard of the Wine, the Chinese Wizard May Ling (aka Bill ), Terry the Birgelen Bard, and the Keeper of the Keys Simpson, who set out on  Long and Difficult Journeys from Ireland and the Shires to meet together in the Metropolis of Roermond where, thanks to The Chud, there would be available a Minibus to whisk them across the Rothenbach and onto Haus Wilms where they were greeted by the Enchantress Birgit .

Thus began the mission to rediscover The Magic.  Of course this necessitated the imbibing  a modicum of the local brews and practising the local patois, which resulted in some interesting meals if not ales! 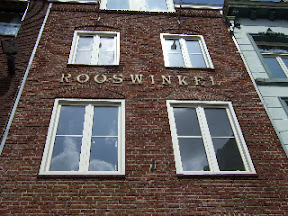 Normally viewed from this Angle

It had been decided that Roermond would be the first area for investigation and so, after a healthy breakfast, we ventured forth to rediscover the Sankt Pauli, Rooswinkle and other establishments we wot of.  Surprise, surprise, The Sankt Pauli, which should still have been festooned with fishing nets and shells, had become a smart block of apartments. 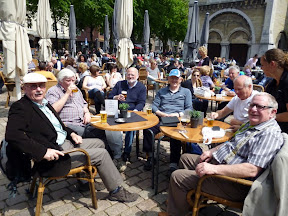 Lunch in the sun

To recover we traversed the Munsterplein, passed the Munster Cafe, and headed for the market where we discovered that the Rooswinkel had not only been turned into a kebab shop but had also closed down. Jacko discovered he had forgotten to pack keks and foraged in the Market whilst the remainder took over an adjacent cafe to ensure that the standard of Amstel had not deteriorated over the years.

From there we investigated the river but, due to road works, were forced to abandon a riverside lunch and repair to the Munsterplein where the local band was taking up residence in the Bandstand.  Replete we summoned our loyal minibus and hied it to the Dalheimer Muhle deep in the heart of the Guhor Woods.  Here we were to meet up with Terry and Keith who had no interest in Roermond due to having spent all their youth hunting something intangible in Effeld and the woods; well that’s their story! 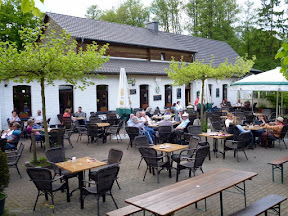 It says something for the powers of the Wizards that the Muhle was only recently  reopened after falling into decline for many years.  We duly increased their profit margin considerably and Jacko was tempted beyond endurance to sample the Waffle, hot cherry and icecream.  This was just to keep his strength up for the Walk Through The Wood.

The Minibus was again summonsed to return the wanderers to the Wilms whilst three took off into the wood to walk the four klicks home.

The evening was taken up with Dinner; it being the Spargel season this was much in evidence and is Not To Be Missed in my estimation.  It is a white and very large variety, not the spindly English type. This was also the evening of the Chelsea/Bayern match, which proved to be so boring that even the German guests were yawning.

We moved into the courtyard to engage in some scintillation conversation and drink more beer until we were asked to come inside as the staff wanted to lock up. One who shall be nameless had bought a bottle of Jägermeister and in the company Bill we retired to said persons room and consumed same.  It doesn’t keep well once opened!! 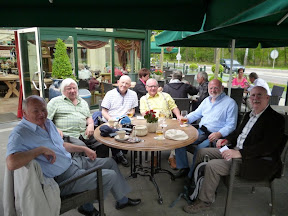 Bill and I were hopeful of a game of golf on Sunday morning at the Rothenbach GC which, although sited on the foundations of Block30, has thrived. Unfortunately it was the one Sunday in the year that they had decided to have a competition so this fell through! Thus we took a taxi to Maters, which despite the new conservatory remains much as it was all those years ago.

Rothenbach GC with the Chud

From here we walked back up to the site of the Kaserne and up to the golf club for lunch where we were met by the Chud who, though an ex member of The Enemy, had been a vital link in the chain bringing this gathering together. 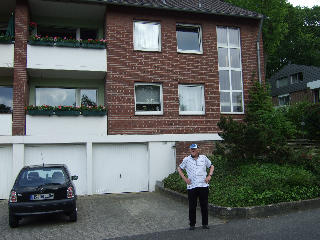 He also acted as chauffeur for the rest of the afternoon taking a group round the old quarters in Wassenberg and Birgelen.  Bill discovered that he didn’t know where he had lived except that it was over 4 garages so we stopped at various locations and took pictures.

The rest of the afternoon was taken up with revisiting the site of 13  and trying to work out exactly where everything had been, especially the WRAC Block, of which many stories were told!

We once again repaired to the Wilms where The Ross was waylaid by his ex landlord who spirited him away, probably to extract unpaid rent. The rest of the party decided to eat in the Burgerstube in the village and this turned out to be A Good Thing.  Excellent food and beer and, once again, lively intercourse; though not with the landlady!

And so it all came to an end on Monday morning when our carriage transported us back to Roermond Station and the parting of the ways.

In all a very memorable reunion and my thanks to Eric for all his efforts, to John Chudleigh for organizing the Effeld end and too all who came for making it so enjoyable.

For The Bard of Birgelen’s poetic contribution Click here