It’s some time since we were last at the Slieve Russell , but some things never change. We were attending the IVEA Annual Conference and the only minor setback was, having to arrive at 9.00 for the golf, which meant that we had a four hour wait for a room (well Josephine did).  It says something for the popularity of the venue that they had three functions filling the hotel on a Tuesday evening and ours and a wedding following on the Wednesday. Breakfast was magnificent although, as we did not have a room, they charged us €16 a piece for the privilege.

I left Josephine in the lounge and headed for the club house in a downpour that brought gasps of horror from the assembled golfers, however, by the time we were on the first tee the rain had passed and the sun was making a valiant effort to bring some cheer to the proceedings! 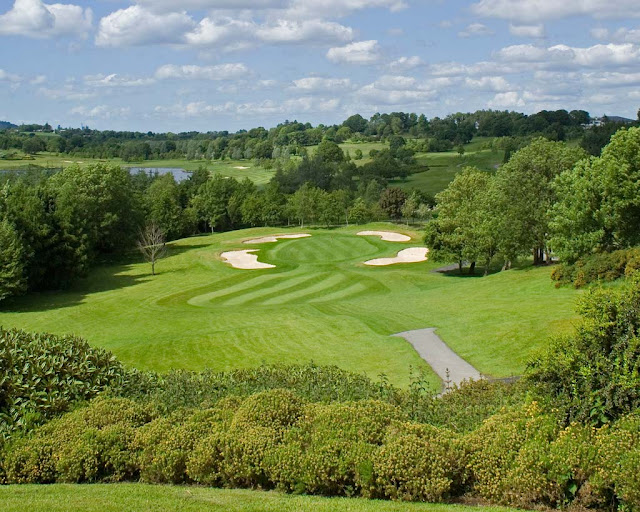 I will not dwell on the golf except to say that the course is one of the very best in the area with some great holes and beautiful vistas; posh word for views! My partner Joe McGrath, almost a local boy, managed to keep his nerve and came out winner of the competition.

Our room was spacious and, happy days, had a separate shower so no clambering over the edge of the bath. The Wi-Fi also worked without any problems and was free.  I was checking our clothes later in the afternoon and realised that our suit/dress bag was missing so went down to collect it from reception.  Disappeared!  For the next couple of hours there was a certain amount of pandemonium as the staff tried to find out where it had gone.  No names, no pack drill but a very old friend of ours had lifted it instead of his own and only realised much later that he really did not need a dress – Well done Ted!

The dinner that evening, hosted by Count Cavan VEC,  was excellent and the service smooth.  Dish of the menu was the starter, chicken and smoked ham Strudel served with baby leaf salad, Sancerre wine and Dijon scented cream. The company was as good as the food and one’s wine glass remained full.  All together an enjoyable evening.  We retired to the bar and the ensuing ceilidh was still in full swing when I took my leave around 2 a.m.  Dinner Menu

Breakfast was as good as the previous day and this time included in our package!

The conference proceeded well with visits by Ruari Quinn, Minister for Education, and another Junior Minister, who both made presentations to the conference.

The hotel staff dispensed refreshments with suitable gravitas and in no time it was necessary dress for the IVEA Banquet.  Another culinary tour de force.  This time my dish of the day was the fillet of Atlantic hake steamed with fine herbs a, Donegal lobster and Chablis, although the dessert, Assiette Gourmande came a very close second.  The choir and accompanying band, from a number of establishments in the county, gave a great performance following the meal. Banquet Menu

A nightcap in the bar, they still give one the port bottle to make a brandy & port, was enough and we turned in.

Unfortunately we did not get a chance to make use of the Spa but it was, altogether, a well spent couple of days in delightful surroundings.